Speech by Mr K Shanmugam, Minister for Home Affairs and Minister for Law, at the 29th Inter-Pacific Bar Association Annual Meeting and Conference

Speech by Mr K Shanmugam, Minister for Home Affairs and Minister for Law, at the 29th Inter-Pacific Bar Association Annual Meeting and Conference

First, congratulations to the IPBA who have put together this very well-organised conference with one of the largest turn-out you all ever had. We extend a warm welcome to our guests from all over the world, but most especially, our distinguished Plenary Guest-of-Honour from Malaysia, President of PKR (Parti Keadilan Rakyat).

The changing international legal landscape, the challenges the legal profession is facing, some of these themes are being discussed in this conference. I think there is very little that I can add that most of you don’t already know. So I will instead, step outside of the legal field, and share my brief thoughts on three other points.

First on our guest, Dato’ Seri, second, ASEAN as a market, and third, Singapore as an international legal hub. All of which in five minutes, I hope.

Dato’ Seri – I hope you have the opportunity of meeting him on his very tight time schedule – has been known for 40, 50 years, as one of the most charismatic politicians on either side of the Causeway. If you listen to his rally speeches, they are something else.

I will give you a personal experience. I was working one night during GE13, Malaysia. One-screen, was streaming in rallies from Malaysia’s elections. I was working on another screen, and was focused on my work. Screens, side by side, at home.

When he speaks – and this is in Malay – you forget your work, inevitably you are drawn to listen to what he has to say. It is a power of his speech. He doesn’t know this, but one of the things I do, I talk in small closed-door sessions on a variety of issues including security and other issues, Malaysia.I use one of his videos to illustrate some points.

Very crystal clear, very powerful. And more importantly, anyone who is about to fall asleep when his video comes up, they will immediately wake up and watch.One of my friends - a very astute observer - said slightly irreverently, it’s a supreme compliment, that when Dato’ Seri speaks, some of his speeches equal MM at his rabble-rousing best. It’s meant as a compliment, but of course, like MM he also has other speaking styles.

So I think in the last 30, 40 years, very, very few who can match his political skills, on either side of the Causeway, and can present themselves that way. But at the same time it has been a roller coaster ride in politics.

I think, Dato’ Seri, you reach the heights and also there have been some very difficult moments of extreme turbulence.

We wish you and Malaysia the very best as we look to the future.

Can I ask for a round of applause?

Having gone through it all, he’s PM-in-waiting now and the leader of the largest party in the Government.

I think it is truly an outstanding honour and privilege for us in Singapore to have him speak with us.

Now let me move on to ASEAN. 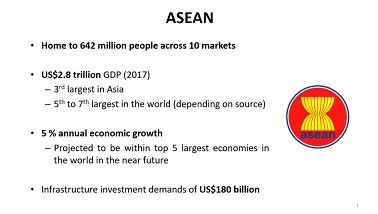 642 million people, US $2.8 trillion in GDP, it is the third largest economy in Asia. It’s anywhere between the 5th to the 7th largest economy in the world, depending on the source. Depending on whether you consider UK and France as being ahead or slightly behind, but growing at 5% and projected to be within 5 largest economies of the world in the very near future, in the next 6-7 years. The infrastructure investment demands top US$180 billion.

So strong economic growth, rapid urbanisation, increased demand for transportation, trade, close proximity to other large economics like China, India and Japan. This is a region with a very bright future. It will have its ups and downs, but it presents excellent prospects for businesses, and lawyers. 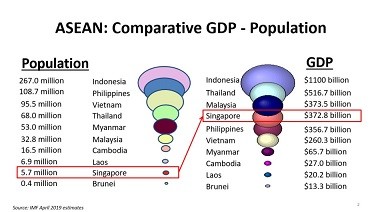 Singapore is the second smallest country in ASEAN, but ASEAN’s 4th largest economy. I’ve put up a bubble chart, on the left is the sizes of the population, you see us, the second smallest and on the right, size of economy. I would say, today, we are about the same size as the Malaysian economy and of course Indonesia and Thailand are much bigger. Philippines is about the same as Singapore as well. Therefore, both the economy of Singapore as well as the ASEAN economy taken together, present numerous opportunities and Singapore provides a good place for companies to base themselves in, to do business in ASEAN. The stronger our relationship is with Malaysia and others, the better it is for everyone. A strong rule of law, trusted legal system in Singapore, I think are amongst the advantages and they allow us to create a strong ecosystem, amongst other things for business presence as well as dispute resolution.

We provide a whole suite of dispute resolution services. 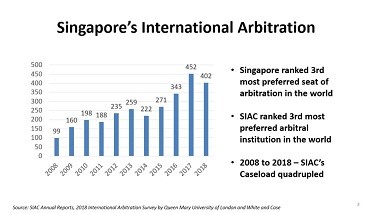 How did we do it in 10, 11 years? First, we changed our arbitration laws to bring them up to international standards. Now we are moving them ahead so that in some ways we are market leaders. We allowed lawyers from around the world to practice in arbitration, both as arbitrators and lawyers so clients can choose lawyers of their choice to argue cases here. We made sure the laws were such that the courts would play a supportive role in arbitration. And of course physical facilities, we turned Maxwell Chambers into one of the best places to hold arbitration hearings.

As the region grows, there’s going to be a lot of work and Singapore is the most natural and most neutral place to handle disputes which arise in this region. We have the Singapore International Commercial Court (SICC) which is taking off. Nowadays some businesses are turning away from private arbitration, they would rather have a situation where they go to court where the judges are appointed by an independent party rather than selected by the parties themselves. SICC fits that mould, the judges are appointed from across international jurisdictions, both civil law and common law, and people can choose foreign counsel to represent them in the Singapore International Commercial Court. And the document disclosure regime is similar to that of arbitration.

Just to complement it, we are also taking steps in the mediation space, to provide businesses with a non-adversarial approach to resolving disputes. The arb-med-arb protocol, jointly administered by SIMC and SIAC, enhances the enforceability of mediated settlements.

We have invested in upgrading Maxwell Chambers further. It is due to open on 8th August, one day before National Day. It will expand Maxwell Chambers to three times its current capacity. We have updated our insolvency laws to incorporate the best practices from around the world as we want to position Singapore as the centre for debt restructuring.

As a result of those changes made in 2015-2016, in 2017 Singapore was named the “most improved jurisdiction” award from the Global Restructuring Review.

We have also played an active role in negotiating the United Nations Convention on International Settlement Agreements Resulting from Mediation. This convention, which will be known as the Singapore Convention on Mediation, is the first UN convention to be named after Singapore and it will promote international trade and commerce by facilitating the enforcement of mediated settlement agreements. The signing ceremony will be hosted in Singapore on 7th August

On 7th August the convention will be signed by countries from around the world, on 8th August Maxwell Chambers Suites will open, on 9th August National Day.

This convention will help Singapore position itself as an international dispute resolution hub and an active contributor to the development of legal frameworks of international scale.

So with that, I welcome all of you again to Singapore. I hope your stay will be enjoyable and I wish all of you a productive conference. Thank you.